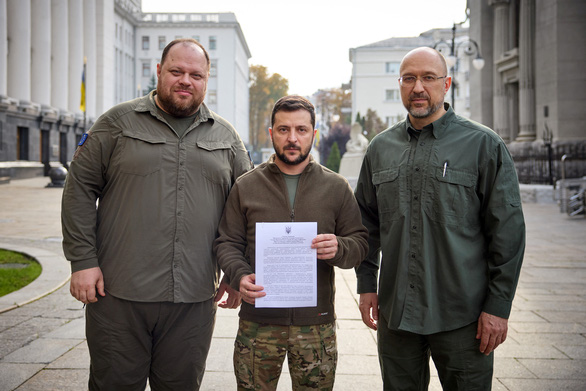 Ukraine’s President Volodymyr Zelensky (centre) with Prime Minister Denys Shmyhal and Speaker of the National Assembly Ruslan Stefanchuk pose for a photo with a written request to quickly become a member of the NATO military alliance in Kiev, Ukraine September 30 – Photo : REUTERS

According to Reuters news agency, Zelensky made the above information in a video that appeared to be in response to Russia’s actions, shortly after Russian President Vladimir Putin chaired a ceremony to announce the annexation of four regions of Ukraine (Donetsk, Lugansk). , Kherson and Zaporizhzhia) entered Russia on the same day.

“We are taking our decisive step by signing an application for Ukraine to join NATO quickly,” Zelensky said in a video posted on Telegram.

The video shows President Zelensky signing a document witnessed by the prime minister and the speaker of the country’s parliament. 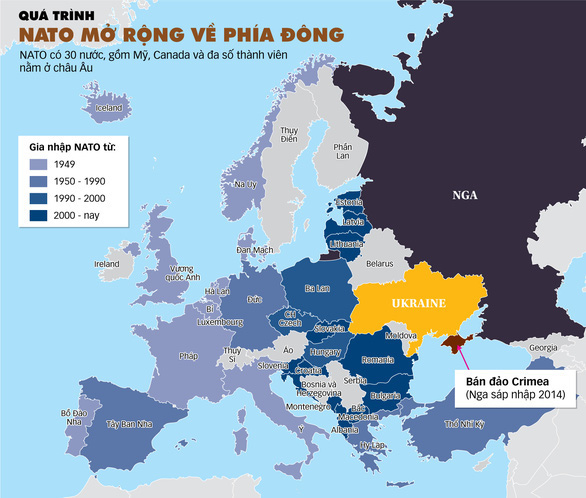 In his speech, Zelensky also accused Russia of trying to rewrite history and redraw its borders. However, he said that Kiev remained committed to the idea of ​​living with Russia on equal, honest and fair conditions.

The President of Ukraine also stated that Kiev is ready to enter into negotiations with Moscow, but not with President Putin.

According to the AP news agency, previously, Russian President Putin has repeatedly said that the prospect of Ukraine joining the world’s largest military alliance NATO would be one of his red lines.

As a rule, the admission of a new member requires the consent of all existing NATO members.

According to DArticle 5 of the North Atlantic Treaty of the NATO military alliance, Any armed attack on one/several members of this alliance is considered an attack on the entire alliance, and all remaining members will provide immediate assistance to the attacked member. .