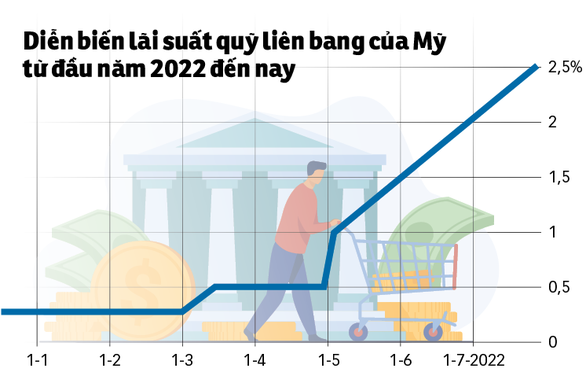 According to the Wall Street Journal, Fed officials are likely to consider raising interest rates by 0.5 or 0.75 percentage points at their next meeting from September 20 to September 21.

Mr. Powell noted that the Fed is not only interested in one or two months’ data. They will continue to raise interest rates until inflation approaches the 2% mark in the long term.

The Fed chair made this statement amid many signs that inflation has reached a threshold but it is not certain that it will decrease.

In his speech on August 26, Mr. Powell said that the improvement in inflation over the past month was still “missing” compared to what the Fed “needs to see”, to make sure that inflation was on track to come down. .

US stocks immediately fell to the floor after Mr. Powell’s speech in Jackson Hole, when the Dow Jones Industrial Average lost more than 500 points. Yields on US Treasuries also fell off session highs.

The Fed has continuously raised the federal funds rate by 0.75 percentage points in the last two meetings, bringing this interest rate to 2.25 – 2.5%.

According to the Wall Street Journal, this is the Fed’s fastest rate of increase in short-term interest rates since the US Central Bank used the federal funds rate as a benchmark in the early 1990s.

The federal funds rate is the rate at which banks lend to each other for a one-day period (overnight loans) for the amount of money exactly equal to the Fed’s reserve requirement.

After the Fed signaled that it would be more cautious with interest rate hikes in July, financial markets expected the Fed to start cutting interest rates next year. But Mr. Powell’s latest speech has dashed that expectation, said Krishna Guha, vice president of consulting firm Evercore ISI. 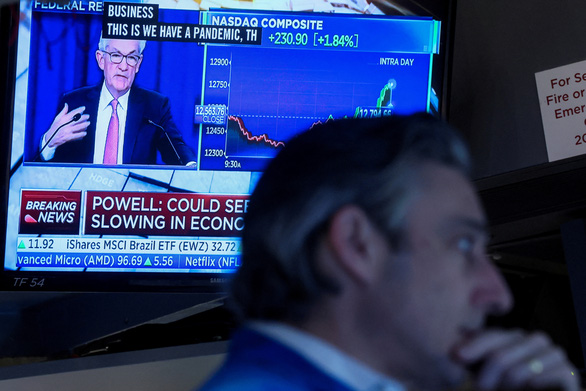 Higher interest rates, slower growth and a weaker labor market should curb inflation. But they will also bring pain to households and businesses.

Economy shows signs of slowing down

Both of these indicators show that prices changed very little in July, mainly due to the sharp drop in energy costs.

At the same time, other fields in The US economy also showed signs of slowing down. The housing segment in particular declined rapidly, while experts forecast the recruitment fever in the past year and a half is likely to cool down.

A day earlier, the US Department of Commerce announced that gross domestic product (GDP) decreased by 0.6% in the second quarter of 2022. Previously, US GDP shrank 1.6% in the first quarter of 2022, the worst result since the spring of 2020 when the world’s No. 1 economy sank deep into recession due to the COVID-19 pandemic.

According to the National Bureau of Economic Research (NBER), a recession is usually defined by negative economic growth for two consecutive quarters. In terms of characteristics, in addition to low or negative GDP growth, the recession period also has high unemployment, declining income and retail sales.

So, while the US economy could have been considered a technical recession with GDP growth falling for two consecutive quarters, the NBER emphasized the rate of decline. Unemployment and consumer spending remain positive for 6 months the begin of the year.

Under the pressure of a recession, the Fed chair recalled the policy of the 1970s, when the US Central Bank fluctuated between raising interest rates to deal with inflation and then pulling back to promote it. growth. This approach ultimately failed.

“The historical evidence is a strong warning against easing policy too soon,” Mr. Powel emphasized.

In 2022, the dollar rose to the highest level in two decades by the Fed’s aggressive policy of controlling inflation. According to Reuters news agency on August 26, the USD has gained about 13.5% against other currencies this year.

A strong dollar can help some countries’ exports and trade balance.

But a stronger greenback also exacerbates other problems such as rising import prices, or it will become more difficult for governments to settle dollar-denominated debts.

Why did the US raise interest rates the most in nearly 30 years?

TTO – The US Federal Reserve (FED) raised interest rates by 0.75 percentage points, hoping to save public confidence that the agency can control inflation, not adversely affect growth. economy and the unemployment rate.