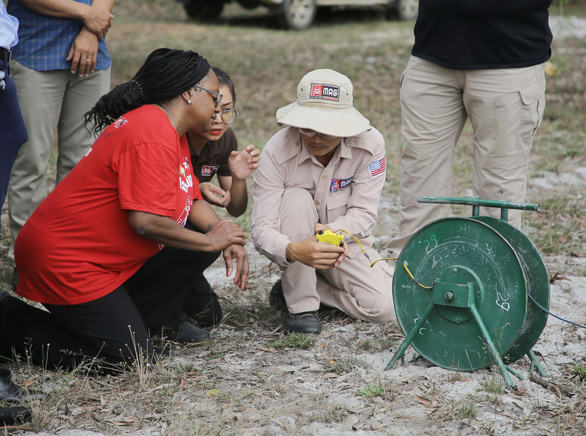 Deputy Secretary of State of the United States visits and works in Quang Tri on the work of overcoming the consequences of landmines – Photo: VNA

This trip was also made in tandem with ongoing US efforts to discuss the Indo-Pacific Economic Framework (IPEF) cooperation initiative. Last week was also the time of the ministerial meeting between the US and 13 Asian countries on IPEF in Los Angeles (California, USA).

In general, during this trip to Southeast Asia, Ms. Jenkins aims to expand cooperation on global health security, counter-proliferation of nuclear weapons, disarmament, export control… and implementation of programs on women, peace and security.

These contents are all implemented by the US side in sync with the direction of Washington’s commitments to the Indo-Pacific region.

Visiting the Philippines from September 5 to 7, Deputy Minister Jenkins had a meeting with senior Philippine officials to discuss nuclear energy cooperation, trade management strategy as well as health security.

Meanwhile, answering questions from the Vietnamese press at an interview in Hanoi this morning On September 10, Deputy Minister Jenkins said that the focus of the agenda during his visit to Singapore from September 11-14 is on trade and export control.

Trade is a hot topic in the context that the US and the world in general are affected by inflation and rising prices. Analysts assert that Asia will not be “unscathed” if the US economy declines, but Singapore and Thailand are two Southeast Asian countries that are worse affected than the rest of the region.

Specifically, Mr. Chua Hak Bin – a senior analyst at Maybank – affirmed that if the US recession, Singapore will be “more vulnerable” than other countries in the region because the lion island nation is “very dependent” on exports. as well as small scale and large economic openness.

Similarly, OCBC chief economist Selena Ling told CNBC: “In the short term, I suspect that the more open and export-dependent economies in Asia like Singapore, Taiwan, South Korea, and possibly South Korea, may be. Thailand will be the most affected places.” 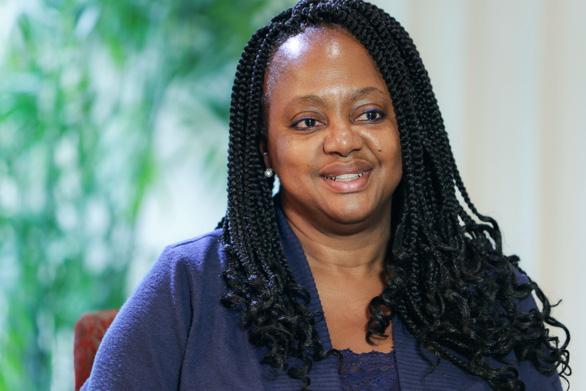 Answering a question from Tuoi Tre at an interview on the morning of September 10 in Hanoi, Deputy Minister Jenkins said that one of the main goals of her visit to Vietnam this time is to find a way to continue developing bilateral relations. direction.

Previously, she had visited and worked in Quang Tri province on overcoming the consequences of war. Quang Tri is one of the places hardest hit after the war, and to this day the US continues to support the province in demining.

Within the framework of the visit to Quang Tri, Ms. Jenkins and the delegation visited the mine disposal site in Trieu Son commune; visited the office of Peace Trees Vietnam (Vietnam Peace Tree – an American NGO), worked at the Quang Tri Province Mine Action Center and met Vietnamese women participating in bomb clearance mine…

Deputy Minister Jenkins expressed his wish to continue to cooperate more closely with Quang Tri locality in dealing with the consequences of landmines and mines in the future.

“We consider Vietnam an important partner and always seek to work closely with Vietnam. My trip this time was to meet with Vietnamese officials to determine how development continues what we are. having…

However, another big content in the trip is the human element. The important thing is that I had the opportunity to meet working groups, young people, women … in Vietnam,” Deputy Minister Jenkins emphasized when answering the Vietnamese press on September 10.

Efforts to dialogue with China

On the issue of security and arms control, Deputy Minister Jenkins emphasized that the two main concerns of the US are the situation in Ukraine and China’s military buildup. Expressing concern about China’s recent military buildup, she still affirmed that dialogue is the top goal.

Earlier this month, US-China tensions continued when the US announced plans to sell $ 1.1 billion worth of weapons to Taiwan. Answering Tuoi Tre’s question on the above issue, Deputy Minister Jenkins commented that this is just a normal program of the US with partners around the world and Taiwan is one of them.

“One of the things we’ve been trying to do with China is to restore dialogue… but we haven’t been able to bring China back to the dialogues that we’ve been talking about. We’ve continued to work on it, though. this,” Ms. Jenkins said.

Military-related tensions between the US and China have escalated over the past time, since the US House of Representatives Speaker Nancy Pelosi’s visit to Taiwan. China considers Taiwan a province, so it has reacted to the diplomatic action between the US and the island of Taiwan. In August, China’s Foreign Ministry announced its decision to end cooperation with the US in various military and civilian fields, as a retaliation move against Ms. Pelosi’s visit.