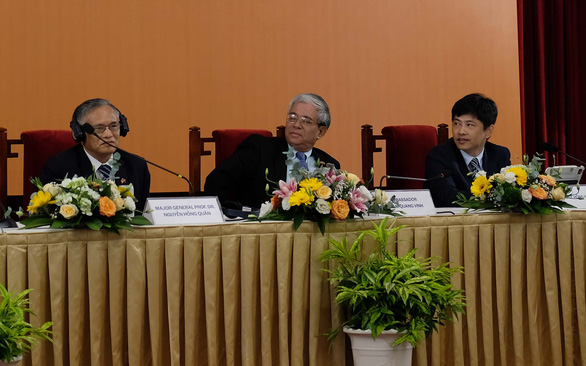 Speaking at the opening of the workshop, US Ambassador Marc Knapper emphasized that the US and Vietnam have achieved many achievements in the past 27 years, since the normalization of relations. The United States and Vietnam continue to stand together as they address a range of challenges in the Mekong, ASEAN, and Indo-Pacific regions, including regional security, climate crisis, clean energy, and trade. drug trafficking, wildlife, transnational crime and global health security,” Knapper said.

According to former Vietnamese ambassador to the US Pham Quang Vinh, the US is an important partner of the region and Vietnam. Washington’s Indo-Pacific strategy covers many areas in which Vietnam shares common interests such as: peace, stability, prosperity, security, economy, technology… In terms of security, Vietnam and ASEAN uphold the rule of law in the region but at the same time need peace and stability. Therefore, according to Mr. Vinh, there should be a balance of power in the region.

Vinh said that the challenge for the region and Vietnam is how to avoid being caught up in the competition between the “big guys” to cooperate with China, the US and other partners such as the European Union, Japan, India…

Major General Nguyen Hong Quan, former deputy director of the Institute of Defense Strategy, said that the two countries are cooperating effectively on national security and defense, reflected in messages such as the Biden administration calling Vietnam a “worthy partner”. trust” right after taking office and then US Defense Secretary Austin Lloyd paid an official visit to Vietnam in 2021.

According to Quan, although not yet a comprehensive strategic partner, Vietnam and the US have built an effective relationship in substance and there are many points beyond the strategic scope.

“Some of the highlights of defense cooperation between the two countries such as Washington’s supply of ships to help Vietnam’s coast guard strengthen its capacity, and support Vietnam to contribute to the world peacekeeping mission. In addition, military trade. The potential will increase when Vietnam is looking to buy weapons and equipment suitable for the new situation,” said Quan.

ASEAN is determined that it does not want anyone to dominate the region. We want strong countries to cooperate with the region, with smaller countries.

Former Vietnamese Ambassador to the US Pham Quang Vinh

The important issue is how to cooperate with all parties in the current context. According to experts, Vietnam and the US need to invest more in dealing with challenges to develop the relationship.

“Challenges always come with opportunities. The important thing here is that we don’t choose sides, don’t get caught in the middle of the competition between the “big guys”, and at the same time cooperate with all the big countries to take full advantage. And not only do we not choose sides, we must actively dialogue with our partners and find opportunities for the country,” Mr. Vinh raised the issue.

Similarly, Dr. Le Hong Hiep – from the ISEAS-Yusof Ishak Institute (Singapore) – said that countries in the region also clearly do not want to choose sides between the “big guys” in the region such as the US and China, because both are important partners of ASEAN.

Regarding the prospect of raising Vietnam-US relations to a comprehensive strategic partnership, Hiep said that the coming time would be an appropriate time when the two countries would celebrate milestones in their bilateral relations. “If there is a comprehensive strategic partnership framework, it will be better to create a legal and political basis for bilateral cooperation. It will serve as a milestone for the bilateral development process,” said Mr. Hiep.

“We do not know when the Vietnam-US relationship will be upgraded to a comprehensive strategic partnership, but Vietnam is still seeking cooperation with the US while maintaining relations with countries in the region and with China. Country” – Mr. Murray Hiebert, expert of BowerGroup Asia, from the US shared online with the conference.

According to Hiebert, although American politics often fluctuate greatly between presidents, as former President Donald Trump emphasized America First policy while Biden focused on cooperation with allies. , but Washington still keeps the “pace” in relations with important partner countries, including Vietnam.

The future of IPEF

In economic relations, the Indo-Pacific Economic Framework (IPEF) announced by the US in May 2022 is of great interest to Vietnam and ASEAN countries. Expert Nguyen Xuan Thanh, Fulbright School Vietnam, said that the pillars in the IPEF have many points that are consistent with Vietnam’s development direction, but so far it is still unclear.

While the future of the IPEF remains uncertain for the remaining two years of Biden’s presidency, Thanh is optimistic that both countries see huge benefits from the framework.