This is the work where the wall collapse under construction caused 5 deaths and 6 injuries on the afternoon of September 15. 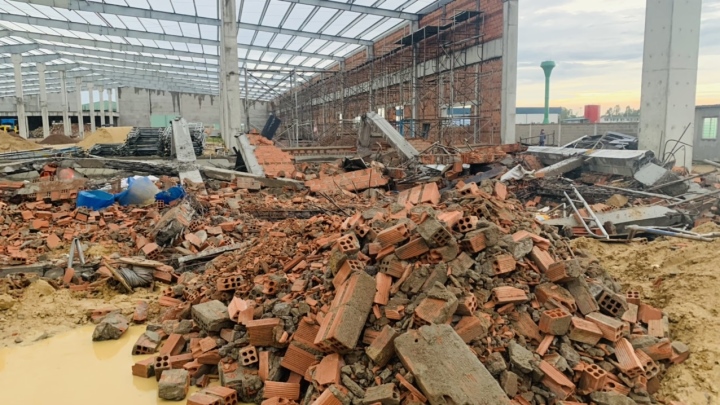 The scene of the wall collapse in Nhon Hoa Industrial Park.

Is the construction licensee appointed as the Head of the Investigation Working Group?

The investigation team is led by Mr. Phan Viet Hung, deputy head of the Binh Dinh Economic Zone Management Board. It is known that Mr. Hung is also the person who signed the construction permit for Savvy Seafood Vietnam Co., Ltd.

The public questioned whether the appointment of the person signing the construction permit as the leader of the investigation working group would have any effect on the later conclusions?

Answer VTC NewsMr. Nguyen Tuan Thanh, Vice Chairman of Binh Dinh Provincial People’s Committee, said:I also understand the public opinion that Mr. Phan Viet Hung is the person who signed the decision to license the construction of Savvy Seafood Vietnam Co., Ltd. I am verifying whether this license is signed by Mr. Hung or not. If necessary, to avoid bad publicity, we will meet to agree on appropriate adjustments at the beginning of next week.”.

Speaking about being appointed as Team Leader, Mr. Phan Viet Hung said that the investigation team was established by the People’s Committee of Binh Dinh province, performing the task according to the responsibility of State management, based on the proposal of the Management Board of the Economic Zone. economy of Binh Dinh province.

The working group will investigate the cause of the incident to see where there is a mistake in the construction process or what is violated to handle the mistake, thereby drawing experience in state management.

“I am responsible for reviewing and investigating the cause of the incident in the construction of a food processing factory in Nhon Hoa Industrial Park, invested by Savvy Seafood Vietnam Co., Ltd., and at the same time propose to solve the problem. construction works in accordance with State regulations.

As the person who signed the construction permit for Savvy Seafood Vietnam Co., Ltd., when I was appointed as the leader of the investigation team, I had to work more carefully to avoid bad public opinion in the process of solving the problem so as not to affect the reputation of Ban“, Mr. Hung said. 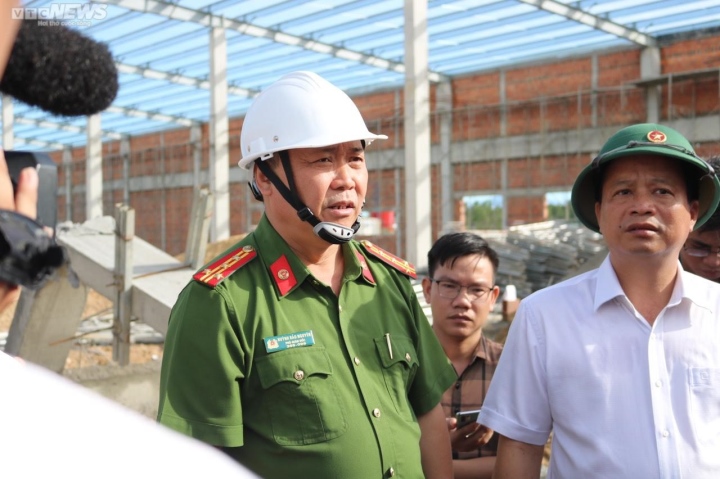 On September 18, Colonel Huynh Bao Nguyen, Deputy Director – Head of the Public Security Bureau of Binh Dinh Province – said that functional agencies are soliciting expertise in construction and construction quality; requesting on the order and procedures on implementation from the stage of design estimation to construction.

“We will base on the results of the scene examination and the assessment of concrete samples after the wall collapse that killed 5 people and seriously injured 6 people in Nhon Hoa Industrial Park to consider and prosecute the collective and related individuals. After prosecuting the case, the investigating agency continued to clarify the responsibilities of the collective and individuals in the supervision, construction and acceptance of the wall where the incident occurred.“, said Nguyen.

Colonel Nguyen informed, the wall is 15.2m high and 38m long. Currently, the contractor is still in Ho Chi Minh City and has not yet come to Binh Dinh to work. This contractor unit hires a unit outside Binh Dinh to self-monitor and self-construct the work.

According to the Binh Dinh Provincial Police leader, if the investigation results show that the cause of the wall collapse is due to the negligence and carelessness of Savvy Seafood Vietnam Company or the construction contractor, in addition to being criminally handled, Relevant organizations and individuals must also pay compensation to the victims.

As VTC news reported, around 4 p.m. on September 15, during the construction of the food processing factory project – Savvy Seafood Vietnam Company in Nhon Hoa Industrial Park (An Nhon Town), the wall of the company. The process suddenly collapsed on top of the workers standing below. The incident left five people dead and six others injured.

The health of the remaining 5 victims is stable

The leader of Binh Dinh Provincial General Hospital said that until September 18, 5 victims in the factory wall case continued to be monitored and treated by doctors and nurses. Particularly, victim Nguyen Thanh Quang (42 years old, living in Phuoc Son commune, Tuy Phuoc district) asked for permission to go home to take care of his wife’s burial.

Regarding the wall collapse that killed 11 people in Nhon Hoa Industrial Park (An Nhon town, Binh Dinh), on the afternoon of September 16, the Binh Dinh Provincial Police issued a decision to prosecute a criminal case to investigate the behavior of the police. Violating regulations in construction causes serious consequences.