More and more friends around me are confessing that they don’t want to have children. Most of them are girls who live in the city, have basic families, good jobs, and are financially independent. Many of them have a lasting love but have no intention of getting married in the near future.

Why does X. not want to have children? Was the background condition so good?

X. belongs to the group that does not want to have children for no reason at all. She simply wants to enjoy her single life to the fullest. However, many other young people decide not to have children because of other problems in the dark corners of their own lives.

J. grew up in a family where her parents divorced when she was 2 years old. At that time, she was too young to remember how the separation happened. But from the moment she became aware, what remained in her mind was J.’s mother taking her to her father’s house every weekend, then trying to drive as fast as she could.

At the age of 24, she always thought that marriage was meaningless. This idea started “nailing” in her head from a joke her mother made when J. was 12 years old: “Don’t bother getting married even as an adult, it’s not worth the hassle.” So every time her friends talk about their wedding or future husband, the 24-year-old always thinks it’s pointless.

“Divorce has caused a lot of problems in my family. My parents always quarreled every time they met, until one day they decided not to talk to each other anymore and it lasted for many years. For me, marriage is separation and pain. And I have no reason to jump into that fire pit.” After all, J. chose not to marry and have no children. “I’m not sure if my child will have to go through the same childhood as I did.” 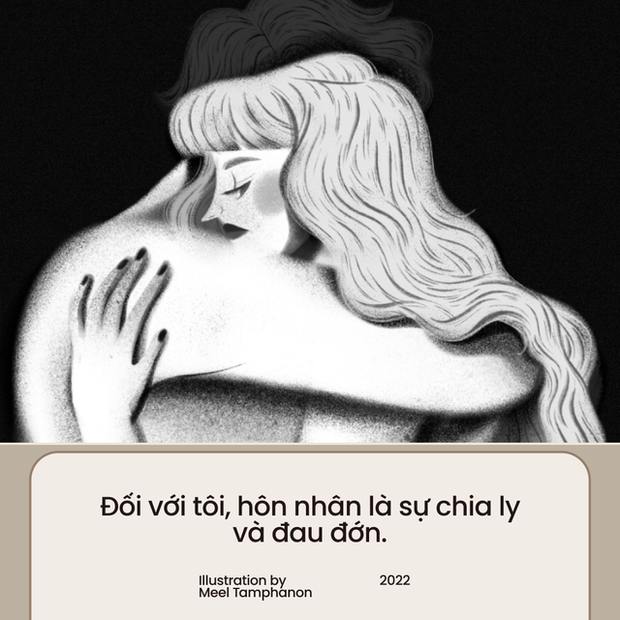 V. – who also has no desire to have children – shared that she always sees the other side of motherhood.

V.’s mother went through a period of postpartum depression after giving birth to her. “So my mom is a worrier and always tells me what she thinks. She often says, ‘I’ll be very worried if you decide to have a baby because it’s not easy’. This affects me a lot. much”.

People around always talk about how wonderful it is to have a baby. However, what V. can see is that the fathers and mothers don’t even have time to brush their hair or brush their teeth.

“You can’t do what you want. You can’t have the same love and love for others as before, when your children are taking all the energy from your life. I see a lot of people around. around the decision to break up as they were struggling with the care of the baby, the job and all the financial difficulties”V. confided. 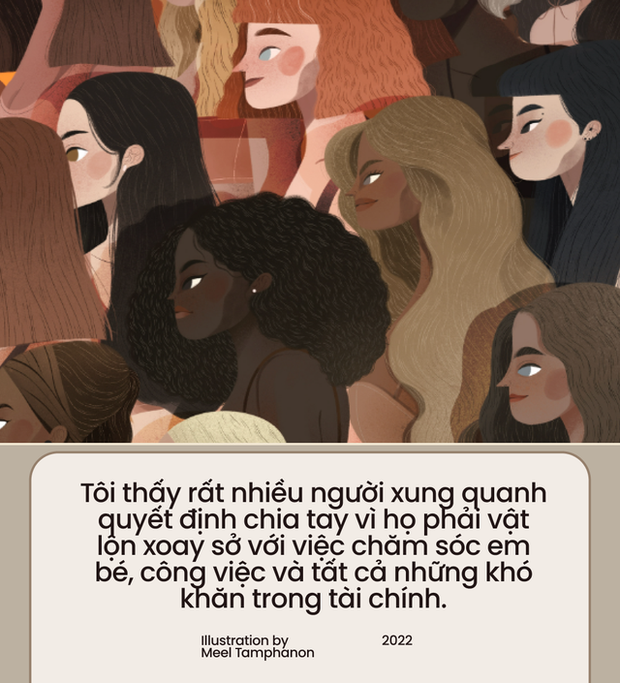 Exhausted from taking care of her sister, the older sister gave up her desire to have children

Many families after divorce, or parents are too busy, taking care of the younger siblings will automatically be the responsibility of the eldest brother. They often feel burdened by “tasks” that do not belong to them. From there, leading to the story that as adults, those people often deny the right to be parents, because they remember the heavy feelings when they were children.

G. is a man with such a story. In difficult times for the family, G. (the eldest sister in the family) did all the work as a… nanny. She had to take care of her from the moment she opened her eyes and woke up, until her body was exhausted when she climbed into bed. G. was stuck in a life without ambition, having no time for his favorite activities since he was a teenager.

“I became the mother of two children that weren’t mine. Even though I didn’t have to deal with the financial burden, I still suffered physical, emotional, and mental losses. I became easily angered, annoyed and harsh even over the smallest things of everyday life”she confided.

“Someone’s mother is not something I’m proud of”

Besides becoming a mother reluctantly like G., the worry of “losing identity” also causes young girls to give up their desire to have children.

What is “lost identity”? That’s when society defines them by the title “mother of baby A/B” instead of personal names or direct recognition of their achievements.

“I’m proud to be an interesting person and have a hobby I work with, I read a lot, and try to take good care of myself both mentally and physically. On the other hand, I’m scared when I’m pregnant or having children, I will quickly lose energy, no longer have the energy to complete any task, even the very small ones.”M. – a young girl who decided not to have children for fear of losing her identity added: “I don’t want other people, instead of identifying me by what I do, will turn to me as a mother. I am very afraid from pregnancy to childbirth, my life will be attached to one person. other”. 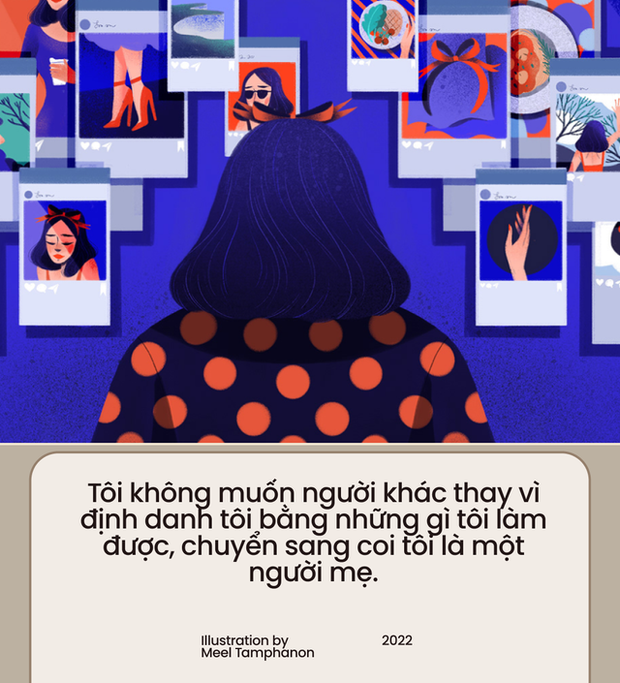 “I know that having a baby is the most wonderful thing. But is it worth it for me to lose my identity from an interesting person and hobbyist to a mother of a baby. I dare not try, because because you can’t go back and choose”M. share.

Many jobs today require quite pressure on time, almost always not in a state of readiness to work. A 24-hour day, there is only so much time, when being held back by the work load, many people choose not to have children.

M. has chosen a very demanding career as an orthopedic surgeon. “I knew that if I had children, in some ways, I would forever feel guilty for my job and for the child. I only have 24 hours in a day, and it’s very difficult to do. can effectively divide work and children. I also don’t see the meaning of having children and then asking someone else to raise them.”

Over the years, M. has received countless rude comments about his choice. A nurse once told this female doctor that her marriage would never be complete because of her decision not to have children.

“People who have chosen like the majority of others in society feel threatened by some who take a different path. Why should they care about my choice when I certainly don’t care? care about their decisions?”M. angrily expressed his thoughts. 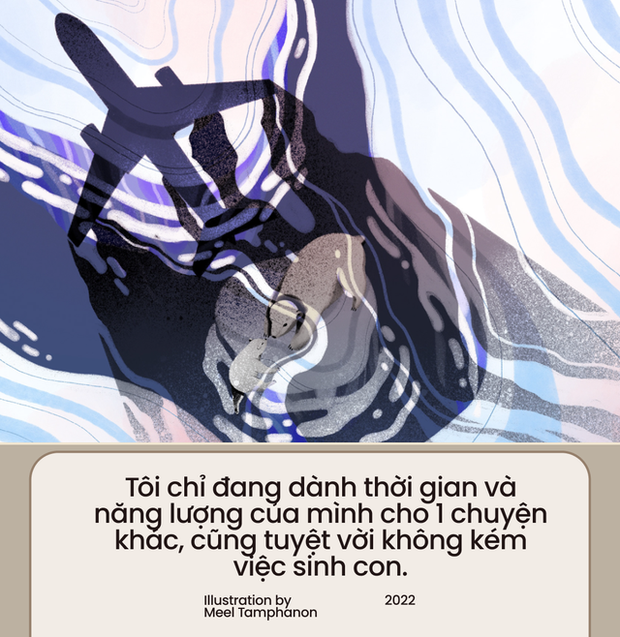 Like M., C. is a writer who loves his job. She shared that when the “biological clock” in having children never runs, the working clock has been stretched.

“As a writer, I often worry that I might be frustrated when I have to give up my little free time to take care of a child. While I was still thinking that, I realized. I’m not ready to have children myself. It simply doesn’t fit the life I’m leading.”

Besides, B., a nurse in the field of mental health, said that arguing that not wanting to have children is selfish makes no sense for her.

“I was spayed in my late 20s and have never regretted it. I care about others, volunteering in animal rescues. I’m just giving my time and energy to 1 another thing, just as wonderful as having a baby.”

“Only you can know what’s right for you: You’re the one to guide your life.”

When it comes to choosing whether or not to have children, it’s important to know what your desires and decisions are, says Ann Davidman, a family and marriage psychologist. Everyone’s choices are not always the same, and neither are the goals. The most effective way to make decisions is to temporarily put the pressure to choose, the fears aside and just focus on your own desires, see what is right for you.

Parenting is neither an obvious nor an argument. There is no single right choice. Only you can know what is right for you: You are the leader of your life.

“You will always be yourself”

Besides, John Carnesecchi, with 25 years of family counseling experience, shares that the key to parenthood is not to lose yourself. Because despite all the changes, there is always one fact: You will always be who you are. You can still enjoy the things you loved before you had children by finding a balance between your children and life.

*Character names in the article are abbreviated to ensure privacy.