According to the Ministry of Education and Training, after nearly a week of opening the general enrollment system, the percentage of candidates confirming admission reached about 80%. This is the statistics from the Ministry of Education and Training on the percentage of candidates who have passed the first round of admission confirmation on the Common Admission System. 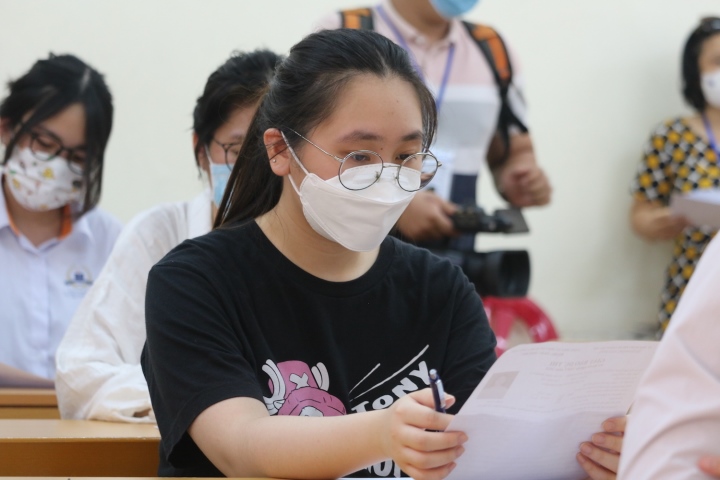 High school graduation exam in 2022 with a score of 27.1 (combination A00), Quang Dat – a candidate in Hanoi wishes to have enough points to study Information Technology of the Academy of Posts and Telecommunications. The male student immediately applied for the 1st wish to enter the Information Technology major of the Academy of Posts and Telecommunications, and the 2nd wish to enter the Computer Science major.

After the school announced the Information Technology major with a passing score of 27.9, Dat failed to enter his favorite industry and considered it impossible to reach his dream. This caused me a bit of a disappointment.

However, Dat entered the school’s Computer Science major. And after being consulted, Dat will decide to enter the “not very interested” major within the allotted time.

Wanting to achieve my dream of entering the National Economics University, I applied for the Marketing Communications major (the program is taught in English), but the results will not be available until October 3. However, according to the enrollment schedule, the admission confirmation time is from September 18 to 17:00 on September 30.

“Currently, I am very confused because if I follow the schedule, I have to confirm my admission to the School of Finance before September 30 to be sure. This means that I will have to pay fees at the beginning of the year about 12 million. So if on October 3, I’m admitted to the National Economics University, I’m worried that I won’t be able to get my payment back. Now I don’t know what to do, so I haven’t confirmed my admission yet.” Share page.

Before the door to pass – fail university, many students when asked shared that they were all stuck in the thought of studying or dropping out of school.

“If you confirm admission to a major you don’t like to be called a university graduate, or try to slow down a year compared to your peers in order to study in the right major, with the right passion. Should I be a year late to try again or “try to eat sticky rice” but next year “what about the sticky rice?”Tran Thi Trang exclaimed.

Faced with the fact that many candidates have passed the first round of admission, but they are not in their favorite industry and thought that it would be a year behind and retake the exam next year, Mr. Le Huu Lap – former Deputy Director of Posts and Telecommunications College said, that’s so sad.

According to Mr. Lap, firstly, candidates do not learn carefully about professions and schools, secondly, admission counseling in high schools and even some universities is not good, sometimes schools promote too much.

On the other hand, according to Mr. Lap, it is the students who choose the school that do not understand 3 principles: First, their favorite major (in order of majors), second is their favorite school (also in the order of schools), then the third is your current combined score (suitable: equal to or higher than the matriculation score of that major in previous years).

“With the above 3 principles, in which I emphasize that my favorite industry is number 1. Now, if I win another major, if I go to school, the idea is that I will always get bored of school and drop out of school before and after, or my academic results will be poor. And the consequences of future work as well.” Mr. Lap said.

According to Mr. Lap, now there are many schools recruiting for the next batch, students should research to choose the right major because they chose the wrong one before. Of course, the brand school has already recruited the first batch. Therefore, choosing a school is also difficult.

For those candidates who have not yet passed the first round of admission or are admitted but not as expected, they still have a chance when many universities have issued additional admission notices.