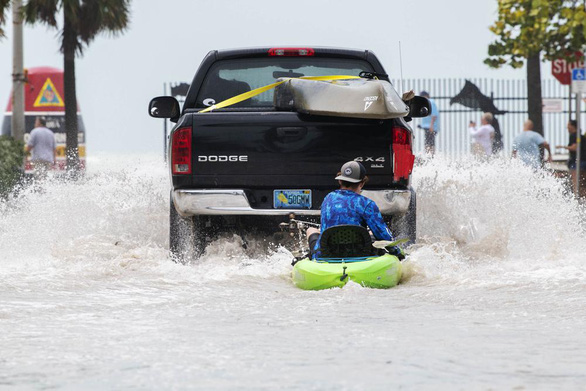 A rickshaw pulls a man with a kayak on a street flooded by Hurricane Ian in Key West, Florida, on the afternoon of September 28 (local time) – Photo: AP

* One of the strongest hurricanes to hit the US. According to the AP news agency, Hurricane Ian made landfall in the state of Florida (southeast of the United States) on September 28, hit the coast with winds of 241 km/h, It was one of the strongest hurricanes ever recorded in US history. The streets were flooded, trees fell along the coast, many people were trapped in their homes… The authorities have warnedAbout 2.5 million people were evacuated from southwestern Florida before the storm made landfall.

“I really couldn’t stand the wind. The rain fell like needles. My street turned into a river. The trees fell. And the worst is yet to come” – a resident named Mark Pritchett living in Venice, southwestern Florida, shared about the moment he stepped outside his house around the time this Category 4 hurricane made landfall.

* The US declared “never” to recognize the territories annexed to Russia. At the same time, the White House said Washington is preparing new economic sanctions on Moscow as Russia’s efforts to annex parts of Ukraine into Russia.

“We will never recognize these illegal merger attempts,” Press Secretary Karine Jean-Pierre told reporters on September 28, after Moscow said parts of Ukraine were occupied by Russia. All controls voted to merge into Russia.

Currently, relations between the US – China and Australia – China are tense. The aforementioned report suggests that Chinese students may choose to study in European and Asian countries instead of the US or Australia in the future due to geopolitical factors. 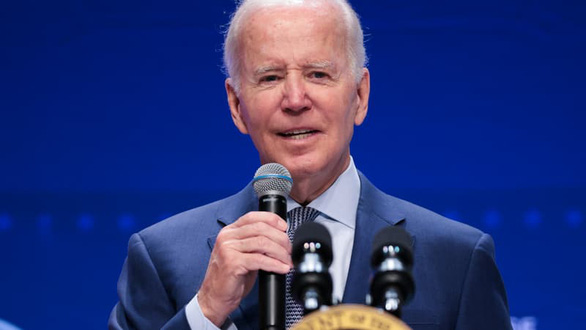 President Biden at a press conference on September 28 – Photo: AFP

* Mr. Biden named the congresswoman who died 2 months ago. According to AFP news agency, this situation happened at the daily press conference at the White House on September 28. When it came to the topic of obesity and food security, President Joe Biden said, “Where’s Jackie?” and as if looking for this person in the meeting room.

Jackie is the name of congresswoman Jackie Walorski, a Republican, representing Indiana. Mrs. Jackie is an advocate for food shortage but she died nearly 2 months ago in a traffic accident.

The White House’s condolence statement at the time also quoted the 79-year-old president as saying he was “shocked and saddened” by the news of the accident with Jackie.

* Russia does not issue passports to reservists. AFP news agency quoted information published on a Russian government portal on September 28, saying that the country will not issue passports to Russians summoned under the order of mobilization. “If a citizen is called up for military service or receives a summons (for encouragement), he or she will not be issued a passport,” the portal stated.

* The US announced a new arms aid package worth $ 1.1 billion to Ukraine. According to AFP news agency, the US announced this aid on September 28, including Himars missile systems, ammunition, anti-drone systems (UAV), radar, armored vehicles …

This new weapons package has brought the total military aid from the US to Ukraine since February 24 (the day Russia launched its military campaign in Ukraine) to $16.2 billion. Russian reserve forces meet at a gathering point under a partial mobilization order, in support of Russia’s military operation in Ukraine, in the town of Volzhsky in the Volgograd region, Russia September 28 – Photo: REUTERS

* The United Nations Security Council meets on the leak of two gas pipelines in the Baltic Sea. “The current President of the Security Council, France, informed us today that Russia has requested a meeting on the Nord Stream leak and that this meeting is scheduled for 30- 9” – Swedish Foreign Minister Ann Linde told the press on September 28.

Amid the suspicion that the leak of two pipelines Nord Stream 1 and Nord Stream 2 (discovered earlier this week) may be caused by sabotage, both the US and Russia have denied responsibility. On September 28, Russian Foreign Ministry spokeswoman Maria Zakharova said US President Joe Biden “must answer” whether Washington was behind the leak.

According to the Azerbaijani Defense Ministry, at about 6pm local time, Armenian units began opening fire on Azerbaijani positions in the Kalbajar region, wounding one soldier. The Azerbaijani side announced that it had responded.

After fierce fighting two weeks ago that killed nearly 200 soldiers on both sides in the most violent outbreak of violence since the last six-week war, Armenia and Azerbaijan have agreed to a truce. fired by Russia.

* The President of Ukraine asked Canada to clear Russian mines. On September 28, Ukrainian President Volodymyr Zelensky said he had called on Canada to begin an unprecedented effort to eliminate landmines in Ukraine after the seven-month Russia-Ukraine conflict. Sharing after talking with Canadian Prime Minister Justin Trudeau, Mr. Zelensky said that Canada has the right technology to assist in this matter.

“I have invited Prime Minister Trudeau to lead a global effort to clear Russian mines and shells on our land. As a result of the war, Ukraine’s territory is one of the most concentrated places. most unexploded ordnance in the world,” Zelensky said. 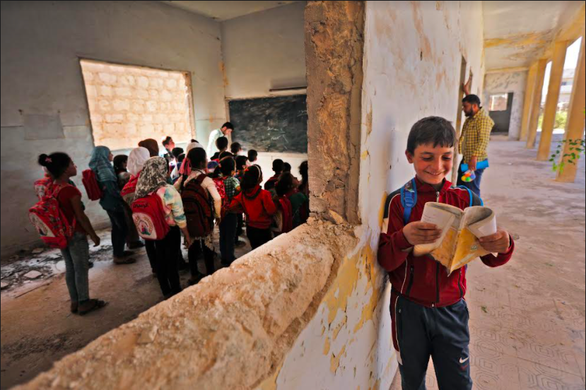 A young boy was happily reading a book that had been scorched in one corner. Other students are listening attentively to the teacher in the classroom. That was the atmosphere during a class on September 26 at a makeshift school in the rebel-held area of ​​the town of Tadif, about 32km from Aleppo in Syria – Photo: AFP